As part of my weekend in London watching The Bat Out Of Hell Musical and seeing the city sights, I was kindly invited to dine at Planet Hollywood in Haymarket.

Planet Hollywood is a famous American restaurant chain which first opened in New York in 1991 displaying a variety of themed food and dining experiences based on Hollywood blockbuster films.

My mum and I arrived just after lunch time and we were greeted with a very warm welcome. The cheerful and friendly star showed us to our table and handed us two chunky menus. We were both quite surprised with how extensive the menu was for both food and drink. I’m quite an indecisive person anyway but it took me twice as long to decided what I wanted to eat! However, despite the restaurant being very busy, there was no rush in making a decision.

After admiring the movie memorabilia on the wall our waitress took our orders and we both settled on the bacon and cheese potato skins to start and then I chose the pink mojito and my mum picked the planet cooler cocktail to drink. 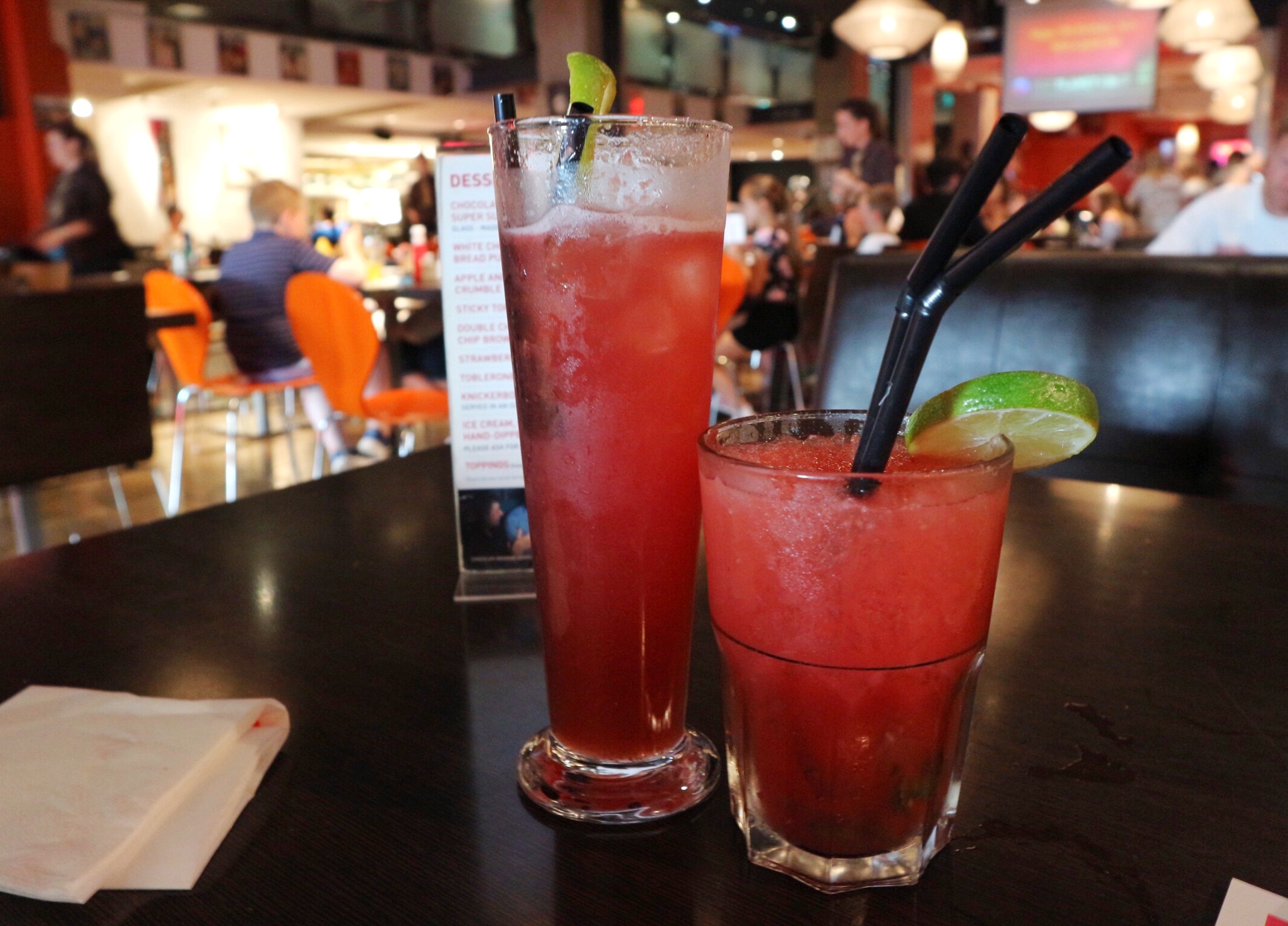 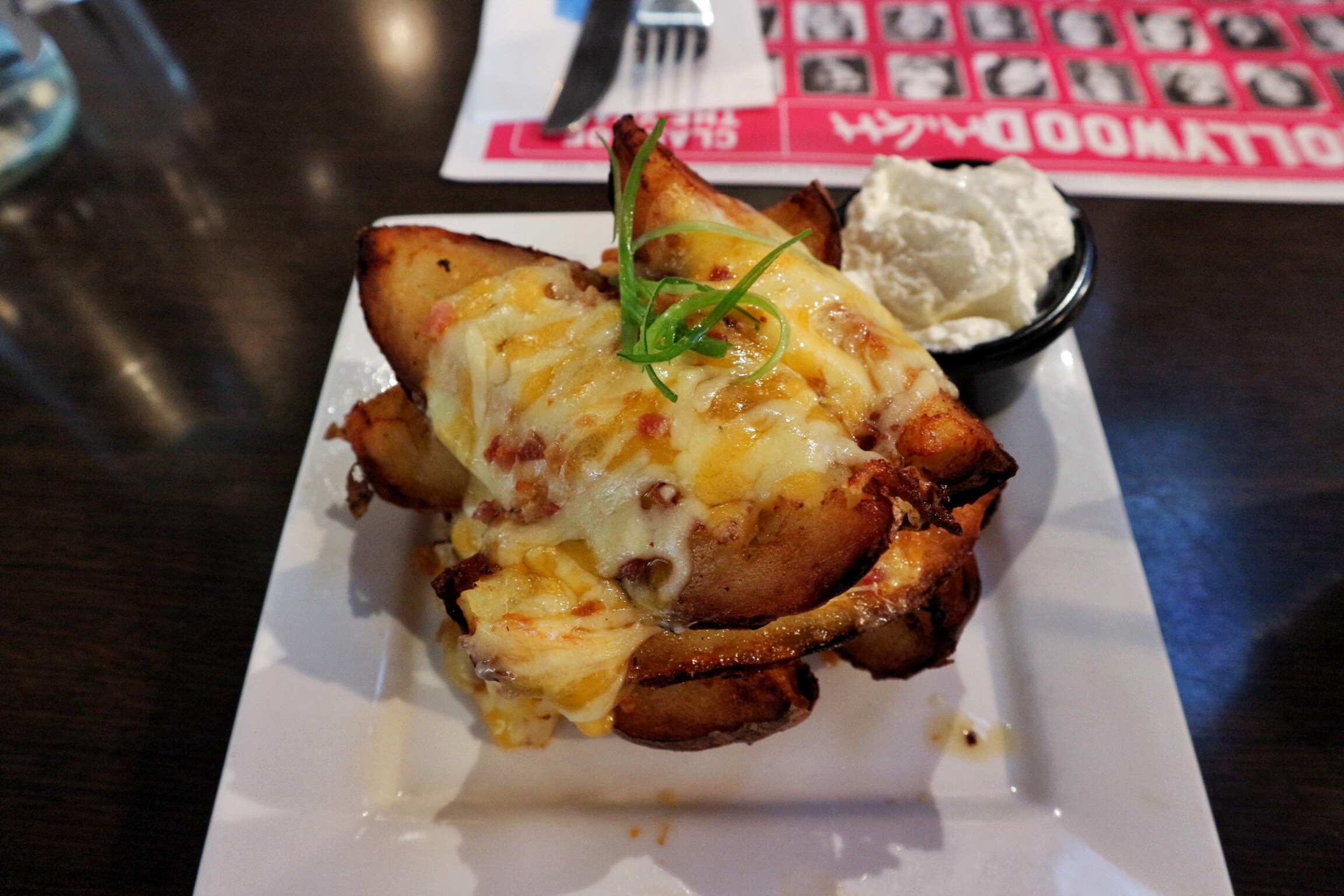 Now I never thought I would say this about any cocktail but the drinks were far too strong. Unfortunately, they were almost undrinkable! The alcohol dominated over the juice and ice mixture and both cocktails just tasted the same. This was disappointing and we both chose not to order another cocktail.

The potato wedges were really good. Perfectly crisp skins and the cheese was creamy and gooey. the sour cream dip was a good accompaniment and  I would definitely recommend ordering these for a starter!

While waiting for our mains we decided to have a walk around and admire the setting as there is so much to look at while dining at Planet Hollywood. The walls are decorated with posters, photographs and artwork from so many Hollywood movies. Alongside this music is playing and you feel like bopping along while eating your dinner. A big screen feature allows you to text a message to the board so you can feel like a star for the day! The kind staff displayed a message on the screen for me and my mum and it definitely put a smile on my face. 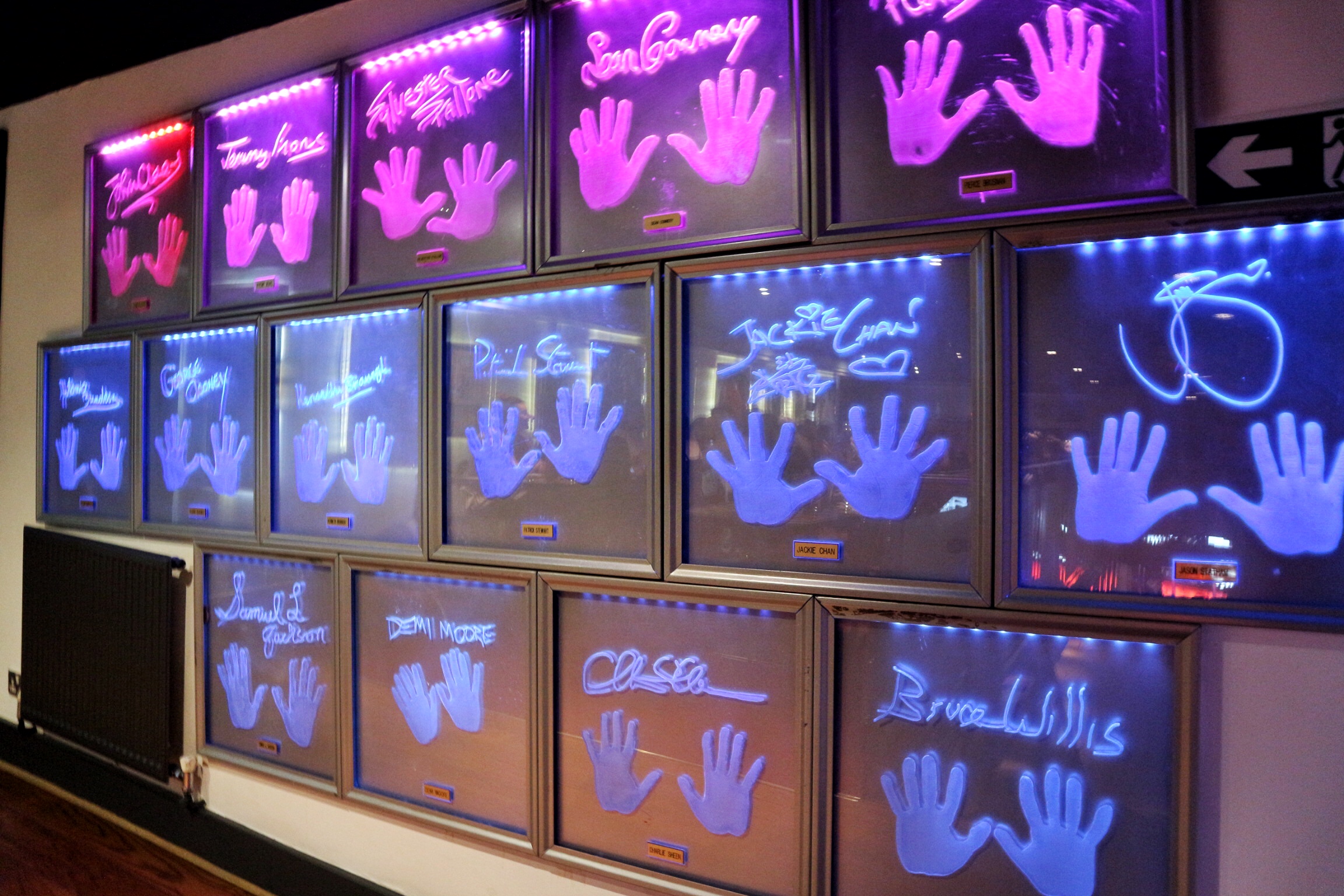 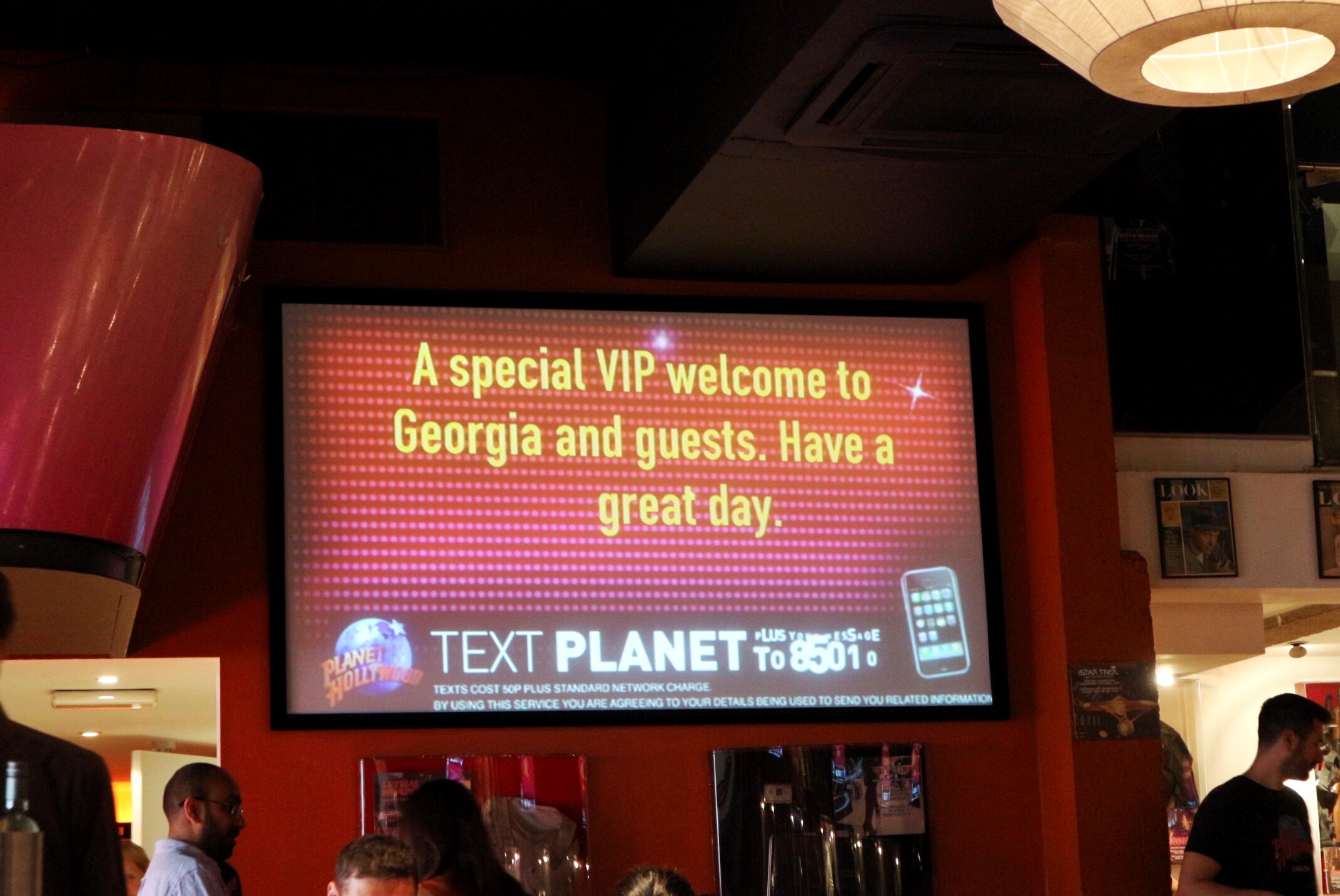 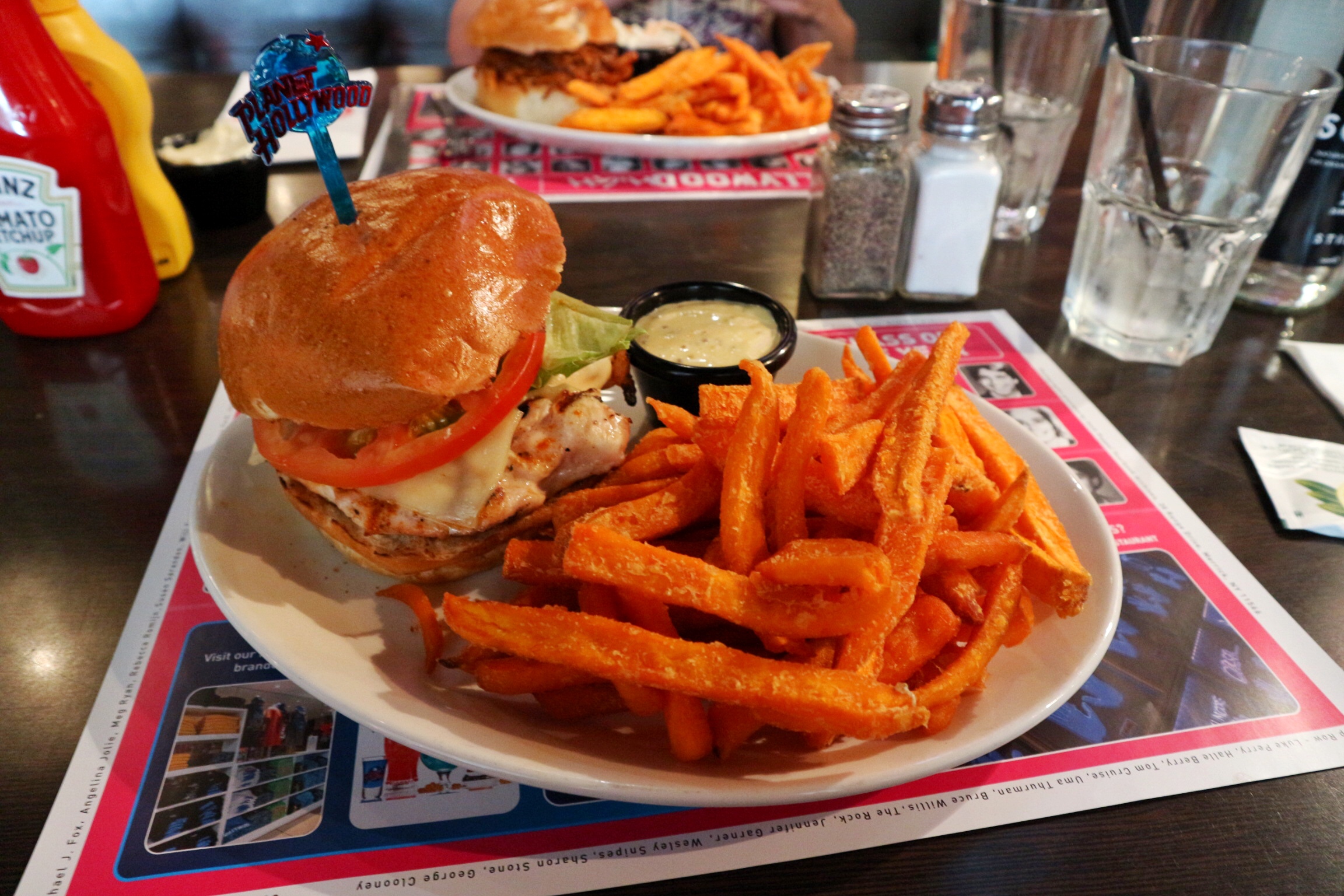 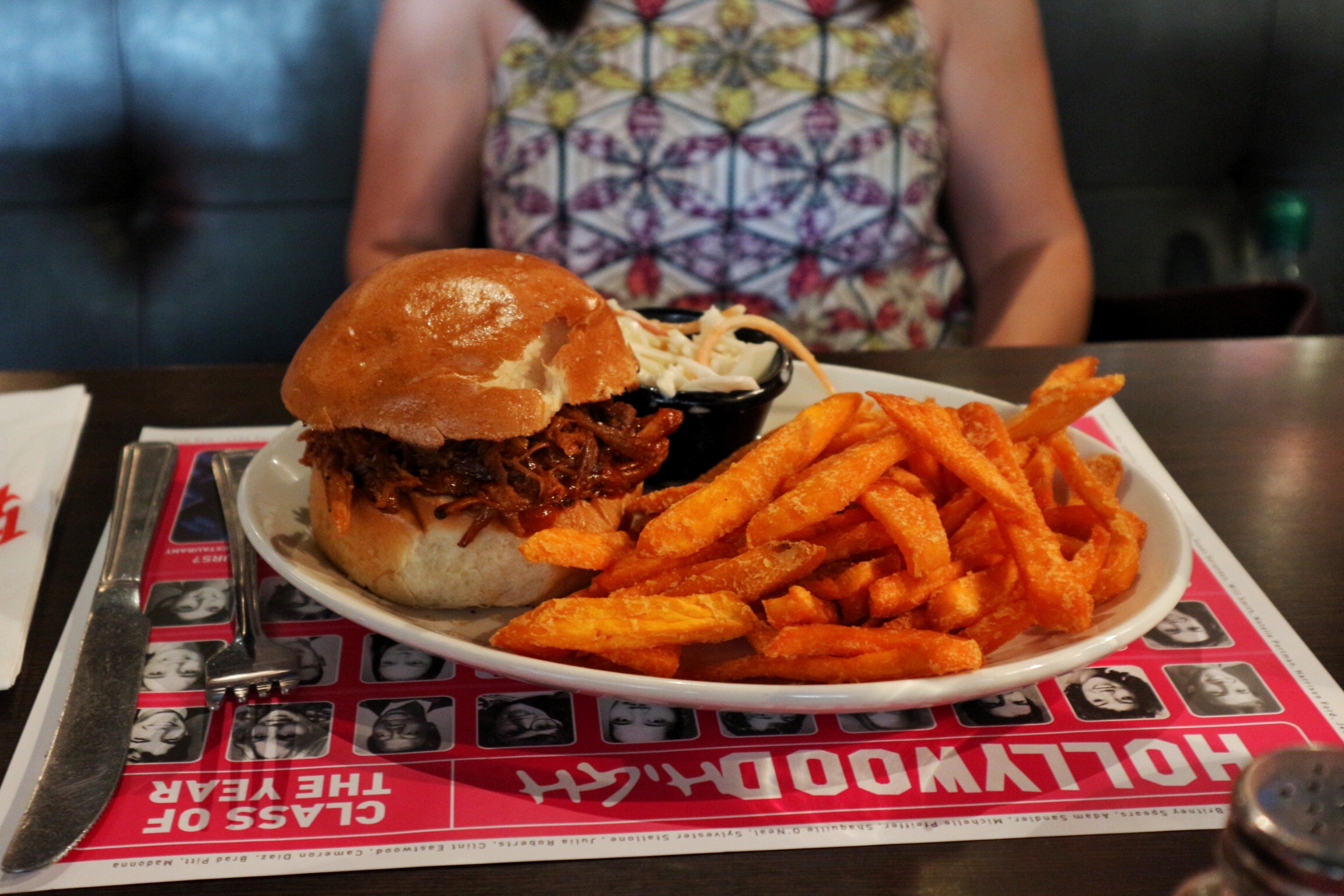 The presentation is fab but looking at it I didn’t know where to start! The sweet potato fries were really yummy and very flavoursome. My chicken burger did lack in flavour and in moisture so I was thankful for the creole mustard and mayonnaise on the side. The pulled pork burger was a success with my mum and she too struggled to finish her main. I did discover that you can, however, take your food in a takeaway box so if you can’t finish it then it doesn’t go to waste.

After struggling to finish our mains we did ‘um and ah’ over getting a dessert but then we decided to share one. I let my mum choose because as usual, I couldn’t make up my mind! It wasn’t long before the white chocolate bread pudding arrived and it was really yummy. The white chocolate and bourbon sauce was rich, sweet and smooth. My mum basically devoured the whole thing because she loved it so much. 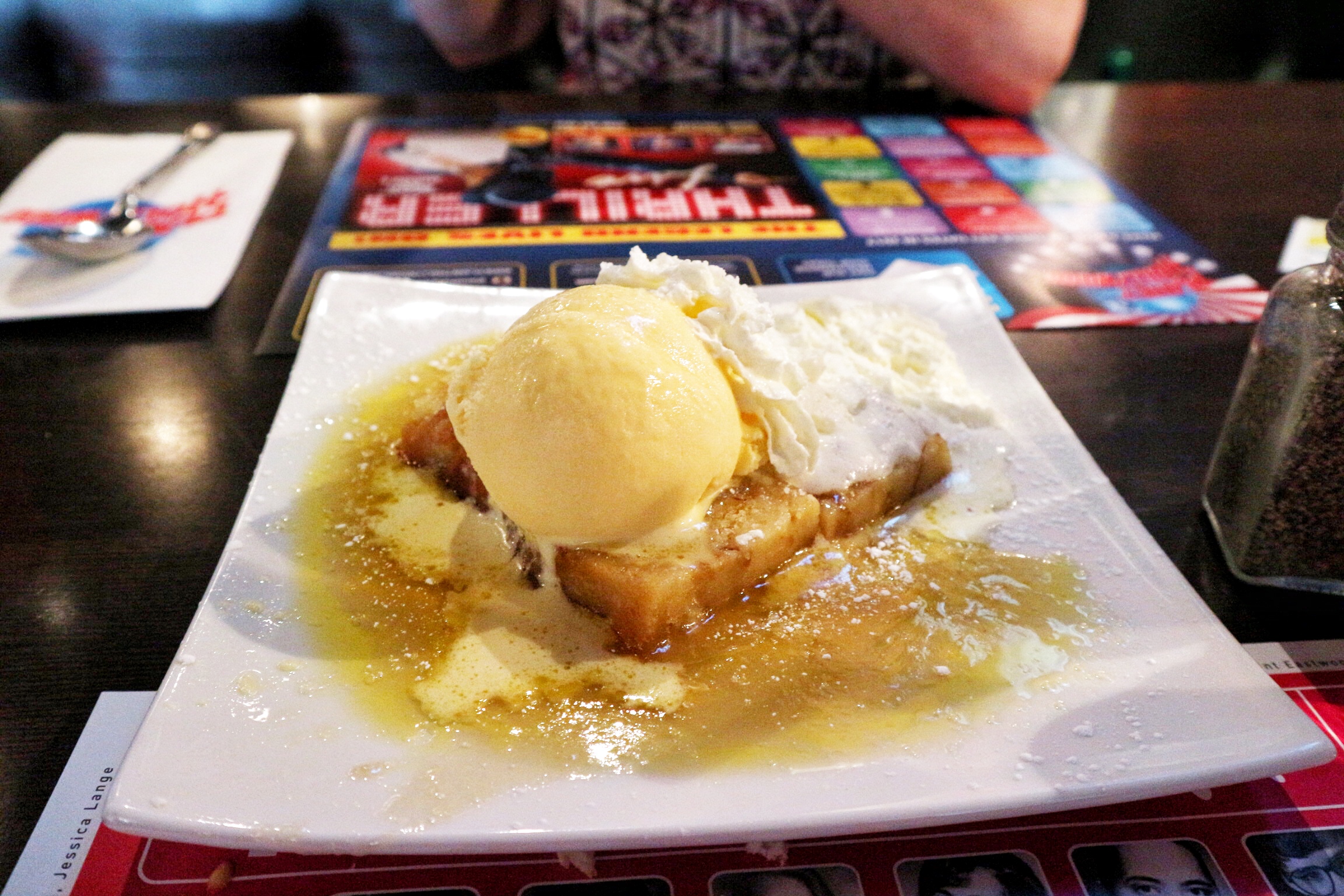 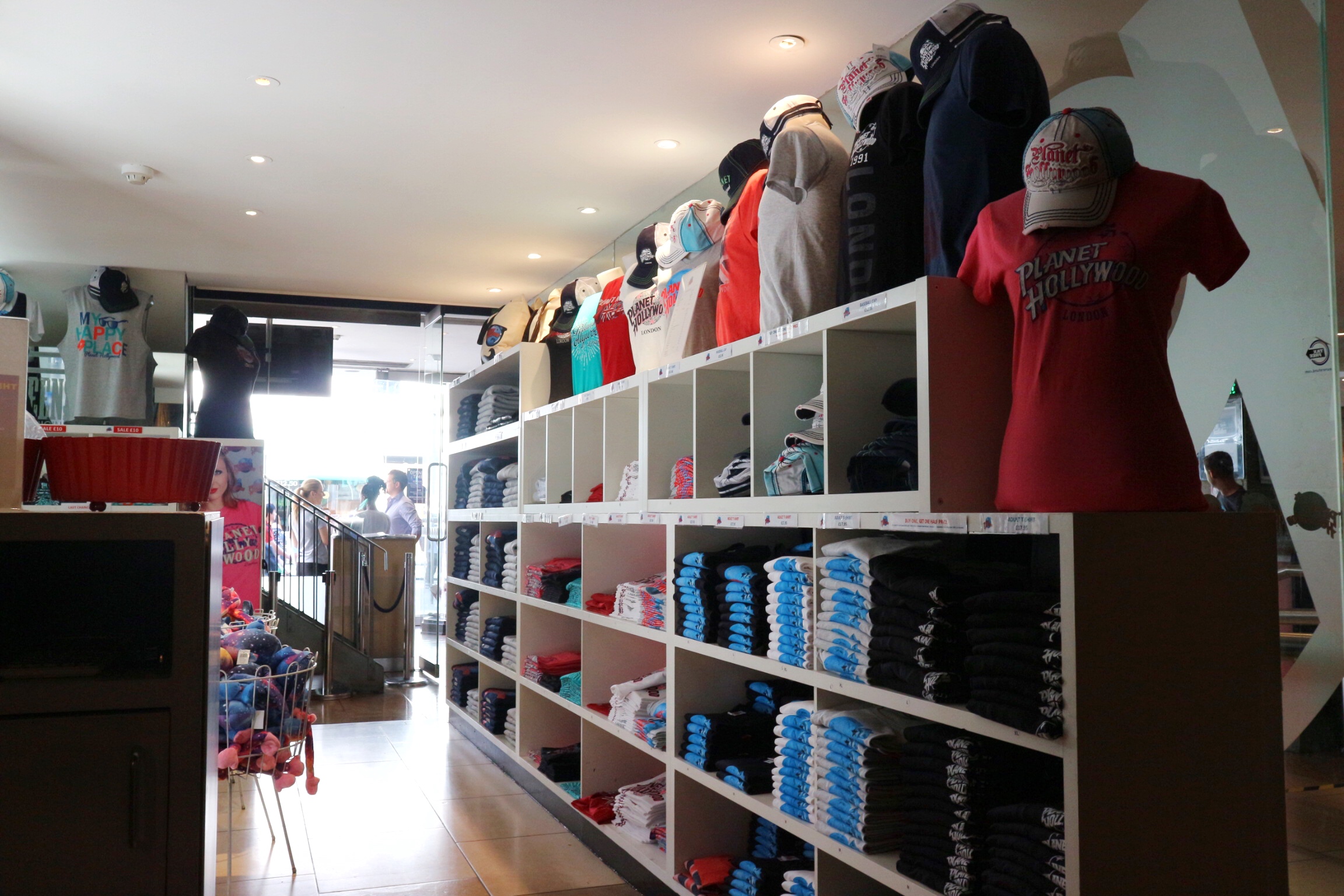 If you want to take a little piece of Planet Hollywood home with you then visit the merchandise stand and get yourself a hat, t-shirt or a novelty glass.

Overall we had a great time at Planet Hollywood. Our waitress was extremely helpful and attentive and the menu has plenty of choice for everyone, ranging from Asian noodles to American hot dogs and sandwiches. There is also a gluten-free menu and a children’s menu. The experience of visiting Planet Hollywood is better than the food itself but I thoroughly enjoyed the visit. The atmosphere is vibrant, the staff and friendly and I think this is a perfect family-friendly restaurant for all ages.

Have you visited Planet Hollywood before? Leave a comment below!